Come 2015, the mobile app market is expected to grow 1000%. That should give you a good idea of how people are depending on their mobile devices for a large number of tasks. Ask yourself the question, when was the last time you used your desktop seriously since getting your latest smartphone?

Industry projections state that mobile devices will overtake desktops in a few years. For app developers this is smashing news; and for the users, well things couldn’t be any better. That’s why there was so much buzz around the latest Evernote app that is now available for the iPhone.

Here’s why it stands out from note-taking apps that are available on the Web.

How does it look?

For those who have used Evernote in the past, you will know that the app is well known for its simplicity. The developers concentrated on functionality while going for a plain look. All that changes with the latest version as Evernote introduces an app that looks great, and offers enhanced features to all its users. The different shades of green and brown are a welcome change. So are the interactive tabs that can be dragged up or down.

What does it do?

Smoother graphics coupled with a cooler dashboard makes it easier for users to take notes minus the hassle. Personally, I think the best feature of this app is that it synchronizes all your notes. When you take a note on your iPhone, the app saves it in a cloud. This means that whenever you open another version of Evernote on your iPad, windows PC or laptop, the note will be waiting for you. You have access to all your notes whenever you need them.

What kind of files can you save?

As any Evernote user will tell you, the app allows you to save notes in the form of text, audio, video or images. Searching for a specific file isn’t an issue because it allows you to tag each and every note you make. Thus, pulling up an old one won’t take up too much time. The app has a strong search feature that keeps all your notes at your fingertips, literally.

The new app has a feature called offline notebooks that can come in handy when you’re not connected to the Internet. If you’re going to be working offline, then Evernote allows you to edit and save your notes on your iPhone itself. You can add them to the cloud later after you’re done with editing. Once you do that, automatic updates are carried out by Evernote across all the versions you use. However, this option is only available to Premium users.

Searching for files on your Evernote iPhone app

Evernote will find typed words that appear in images as well as handwritten notes. This makes it easier to search for a particular topic. The geo-location tagging feature adds places to each and every note you create. This means that you can search for a file by typing the name of the place you were in when you typed it.

Awesome Note allows you to use different colors to code folders. These act as visual cues that can help a person pick out the right file. There is no such color coding with Evernote. Old users will feel that the design and dashboard were unnecessarily revamped.

Overall, Evernote for iPhone is a frontrunner when it comes to note taking apps. The simple note taking application has a host of powerful features, as well. At $5 a month, paid users get a few added features that could really help if you’re an avid Evernote user. 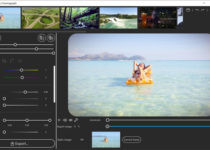