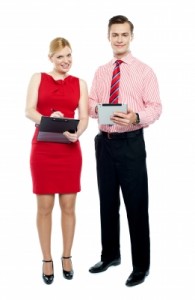 Mobile devices are rapidly becoming the most popular way to access the internet. Where techies used to await the newest desktop and laptop computers with anticipation, fans now look forward to new phones, tablets, and e-book readers.

These new devices have varying display sizes, different hardware specifications, and a wide range of compatibilities with existing software. Websites that aren’t optimized for tablet browsing run the risk of losing a large segment of their audience.

In order to prevent this loss, there are a few quick tips bloggers can use to create a smooth experience for readers. Most of them revolve around spending a bit of time thinking about what web browsing on a tablet entails—and they’ll probably seem self-evident in retrospect, Here are a few of basics:

Of course, tablet screens are smaller than most laptop and desktop displays. This means that sites should be designed to allow for this smaller screen, both by having large, clear text, and by laying text out to avoid horizontal scrolling. In general, readjusting the display size is going to require a basic understanding of what’s called responsive design—that is, web design that adapts to the display size of the user.

Because tablet users are swiping and tapping instead of scrolling and clicking, user interface elements such as buttons, menus, and text boxes need to be large enough for touchscreen interaction, and spread out enough so that the wrong element isn’t accidentally selected. Design elements that require right-clicking (which on most tablets translates to a tap-and-hold) may not be user friendly.

Tablets generally lag behind laptops and desktops in certain hardware specifications. The most relevant to a blogger would be RAM—even high-end tablets tend to have much less RAM than most standard modern laptops. This can affect how quickly pages load, and can cause certain websites to run very slowly, crash browsers, or even crash the device. Avoid or remove elements that tie up a lot of memory, and your site will work much better for tablets.

Tablets in general are less likely to support Flash and Javascript, so use different methods to display dynamic content and media. YouTube video embeds currently employ a responsive design that selects between a Flash player and an HTML5 player based on a device’s compatibility to each. For other media, you may have to do your homework.

The state of the web regarding tablet compatibility is still fairly poor, so any effort to adapt to the new market will likely be seen as a major advantage over other sites. That said, there are ways to go the extra mile, e.g. implementing responsive design for both the landscape and portrait orientations of tablet screens. Whatever you decide, usability testing is key. Try your site on multiple platforms to ensure compatibility—remember, the most important thing is to make sure nothing gets between your audience and your content.