There has been a lot of buzz about ultrabooks lately. The devices fall somewhere between a laptop and a tablet, and many people are wondering if this new, streamlined class of laptops will replace tablets for good. Ultrabooks do have a lot of benefits and advantages for convenient, portable personal computing. However, they’re still no match for the increasing popularity of tablets. Here are some reasons why no matter how great ultrabooks are, they won’t be replacing tablets anytime soon. 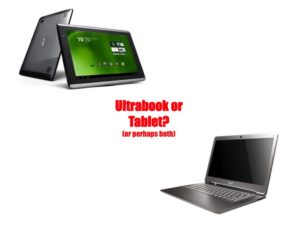 Convenience
Ultrabooks do have a lot of excellent qualities. For example, they’re incredibly lightweight (approximately three to four pounds), thin (less than one half of an inch), and they have long-lasting batteries (an average of eight hours on a single charge). They’re a sleeker, more portable version of a laptop. For many people, ultrabooks represent a better way to do work and research while on the go. Because they’re so similar to laptops, they appeal to many who rely on Windows programs like Microsoft Office. However, tablets still win out on convenience. They’re also incredibly light, thin, and long-lasting, and they’re even smaller than ultrabooks. Because most people don’t need all the functions of a Windows device while out and about, a tablet meets all their needs while being even more portable than an ultrabook.

Apps
One of the main appeals of tablets is all the great apps that are available to run on them. Apple and Android offer more than half a million apps each, and with that selection you can find an app to meet almost any need or want you can think of for computing on the go. Ultrabooks run a Windows OS, so there aren’t nearly as many apps available. In this sense, ultrabooks would be much closer to replacing laptops than tablets. However, they’re not likely to eliminate the need for laptops, either. While Windows 8 will be an appealing feature of new ultrabooks, people who want the new Windows OS might as well purchase a laptop with more RAM and storage capabilities.

Cost
If ultrabooks could hope to replace tablets, they’d need to be incredibly cost effective and cheaper than tablets. However, at this time, they’re more expensive. Most ultrabooks are about $1000 and up. Most tablets can be purchased for a few hundred dollars less, which makes them much more appealing to most consumers. While ultrabooks will probably decrease in price as the year goes on, they have a lot of ground to make up if they hope to steal some of the tablet market. At this time, tablets are just a better buy. Ultrabooks are occupying an odd place in the personal computing market. Most buyers would rather spend a little bit more for a more traditional laptop.

The Bottom Line
While ultrabooks are interesting products and may improve a lot as the year goes on, they simply aren’t viable replacements for tablets. Laptops, maybe, but only if they are enhanced enough to have the same capabilities when it comes to things like gaming that require additional specs. At this time, tablets are a more unique, appealing, and cost-effective way to access the Internet and perform a wide variety of functions while on the go.